Say what you will about zoos and wildlife parks but in this day and age they have become an essential part of the preservation of our planet’s endangered and exotic species, thanks in no small part to our ruining of their habitats of course. Of course there are many zoos out there that are purely for profit and keep their animals in tiny enclosures, barely feeding them and caring little for the preservation of their species.

That’s something you certainly couldn’t say about Bonorong Wildlife Sanctuary near Hobart who are totally committed to rescuing injured animals, as well as working to restore and maintain one of, if not the most endangered animal here, the Tasmanian Devil. I saw a fascinating documentary about their efforts the other day, which highlighted a fantastic breeding programme on Maria Island which I believe is going rather well indeed.

When Sinéad announced we’d be going to Bonorong with her colleagues from the University I was super excited. I’ve already seen some of Tasmania’s wildlife while out and about, which you can read about in previous entries but of course animals such as the Tasmanian Devil remained unseen.

We enjoyed a lovely drive up to Brighton where the sanctuary is based, passing alongside the Derwent river on its Western banks and arrived at Bonorong in around 40 minutes. Huge thanks to Marina for driving us there! It’s $25 to visit the sanctuary or $30 for an annual pass, so naturally we went with the annual pass as it’s a place I’d happily visit again and again.

Upon entering the park we were greeted by a number of Forester Kangaroos, not in an enclosure but right there in front of us. We had been given a small bag with which to feed them but I didn’t realise that meant such close quarters interaction, it was magical! After a brief greeting we were off on our tour with the first stop being the baby wombats. I’ve gone through a series of animals that I call my favourite over the years with chipmunks always featuring near the top but I think I have a new definitive #1 with wombats. They……are…….awesome!

Next on the tour was the main attraction as it were, the Tasmanian Devil. We were introduced to Batman who was a little shy at first but eventually emerged from his burrow and proceeded to drag himself along the ground much to the visitors’ amusement. He’s part of the rehabilitation programme and was a little freaked out as there was a female in the enclosure next door which had him on edge, not to mention the big group of humans oohing and aahing at him from the enclosure walls.

We’d only seen a handful of creatures and it was already well worth the entry fee. But wait, there’s more! The next little fella on our tour isn’t native to Tasmania and there aren’t any plans to introduce them just yet. I’m talking about Koalas of course and Bert was to be our host after a rude awakening. Our very informative guide was full of great nuggets of information about all the creatures in Bonorong and told us affectionately about the lifestyle of Koalas. Sleeping….lots of sleeping. Koalas can only eat Eucalyptus leaves and as they don’t provide much in the way of energy, it takes a lot for them to move about which often seems them having 4 hour days. Wouldn’t we all love that eh?

Our guided tour ended at this point and we were free to explore the rest of the park and discover the other creatures that were being cared for by the sanctuary. Thinking back on it, I don’t believe I’d ever seen any of them before in my life despite having visited a number of zoos throughout the world. There was Randall the Echidna who sadly had lost a leg after being attacked by a dog. We found him hidden inside a hollowed out tree and he looked mighty happy to be there. Then there was Fidget the Albino Bushtail Possum who was hungrily munching on his favourite meal of corn. Towards the back of the park we came across the Potoroos, a jumpy group of little marsupials who were surprisingly fast. Who else was there, ah yes Huey the Spotted-tailed Quoll who was so excited for his dinner he tried eating the jacket of the lady who brought his dinner!

Then there were the birds, the very dignified Tawny Frogmouths who seemed unfazed by the patchy rain. There was Fred the 100 year old (yes ONE HUNDRED) cockatoo who seemed to have a thing for the ladies as he stopped talking once I came near. A group of Emus stood next to the path waiting to grab a bite to eat from a passer-by and one hapless visitor feel victim to their greedy beaks as one snatched the whole bag from her hand. And then of course there was Aunty Phyllis the Long-billed Corella who would bob her head up and down and side to side as you approached as if she were wearing tiny earphones and listening to some thrash metal.

As we gently strolled around the various enclosures we were never far from company as the kangaroos and wallabies would boing boing boing their way over to us looking for a snack and to have their necks rubbed. It was really wonderful having them all around us and made you watch your step every time you stepped back from one of the enclosures. Am I glad we went with the annual ticket? Hell yes! I’ll definitely be returning to Bonorong again……and again and again. Not only is it a great day out but the work that they do is fantastic and they need all the support they can get so that they may continue preserving Tasmania and Australia’s brilliant wildlife.

The scenery surrounding the sanctuary is equally impressive with stunning vistas of Mount Wellington and the surrounding countryside aplenty. 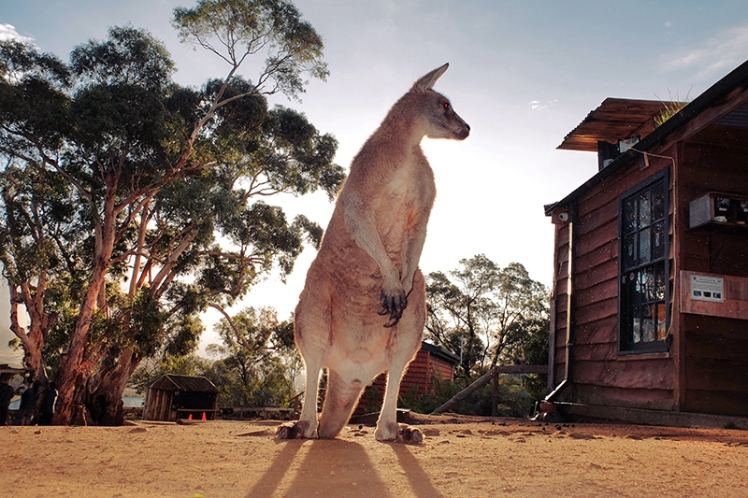