The 23rd Aviation Fair of Pardubice took place at the start of June and we were hugely excited to see it. Ireland isn’t very well known for its military capabilities in the skies, part of the joys of being neutral I suppose. So the opportunity to see the latest hardware is very rare indeed. A number of years ago the aircraft carrier John F. Kennedy visited our small island and brought with it a menagerie of American military muscle that was fascinating to see and touch up close. But there was no airshow element to it, no fly bys or aerobatic displays, just F14s and F18s sitting pretty in a field on the edge of Dublin airport.

This show was going to be different, the planes on display would be taking to the skies for our pleasure and amusement and I for one couldn’t wait. The star of the show was scheduled to be the mighty B17, star of the movie “Memphis Belle” and an all around kick ass World War II era bomber, complete with that coolest of all accessories, the ball turret. Alas as the day drew nearer, the weather reports grew more grim, and updates from the organisers hinted that the B17 may not be able to fly. And so it was on the Saturday, the heavens opened, and the main attraction was not going to be able to make it, they only have a license to fly in good weather. A plane that could fly on one engine and through enemy territory surrounded by anti-aircraft fire, taken out of action by some drizzle. A terrible shame but I understand it’s a museum piece and its owners obviously don’t want to risk her getting damaged or worse.

There was plenty more to look forward to though, including a re-enactment of ground warfare during World War II, complete with authentic vehicles, weapons and uniforms. More on that later. We set out for the airport on the bus and arrived at the same location where we had previously departed from the horse racing. If only I had known such a bus existed it would have saved me the adventure of walking through the woods previously. From the bus stop it was a short walk to the train platform where we waited for a delightfullly old fashioned train that served as a transport link to the airport.

We carefully disembarked from the train using the wooden steps provided and made our way into what is in fact a military airbase/public airport. The hangars are what I would imagine the teletubbies universe would look like if they went rogue and formed a military state. Lined with grass, the huge doors the only giveaway that you’re looking at a manmade structure and not some strange little hill. The main entranceway was lined with some of the Czech Air Force’s finest possessions, helicopters, jet fighters and massive military trucks that looked like they could survive a nuclear blast from two feet away.

After walking through the modern era of military equipment it became clear that the past was equally important. Men walked past us in World War II era costumes and in the distance I spotted propellers peaking out above the crowd. I recognised their yellow tips immediately, it was the Spitfire that had been sitting in the middle of the local shopping centre for the past few weeks, advertising the upcoming airshow and generally making customers go “oooooooooh” and “aaaaaaaaaaaaah”. As we walked further into the display area, past the myriad of stalls selling everything from food and drink, to replica guns and toy planes, the sheer scale of vintage machinery became apparent. There was an entire camp dedicated to World War II, with soldiers, pilots, generals and their mistresses all decked out in full replica military gear. It was like we had travelled back in time, an absolutely amazing sight. There were Red Army soldiers sitting outside their tents, mere feet from SS generals and RAF pilots, of course it was all an act but the sight of these once sworn enemies mingling amongst each other was eerily amusing. 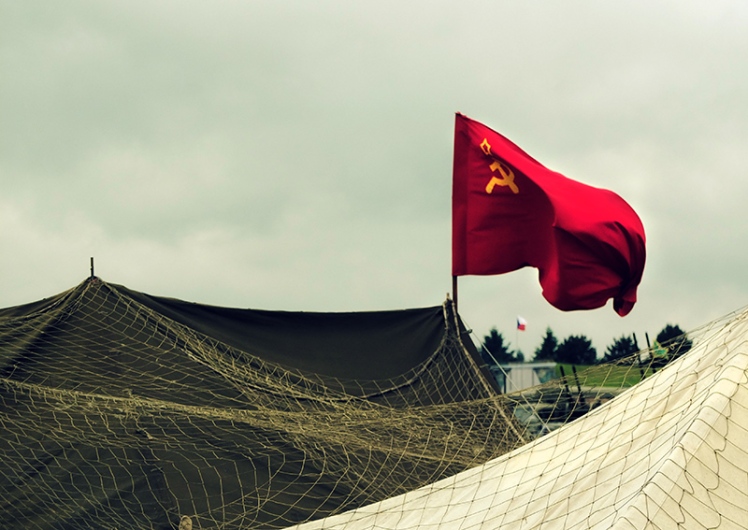 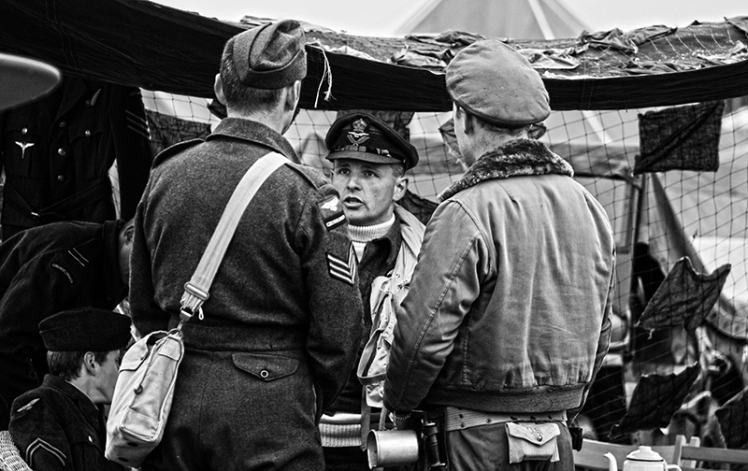 The show started with a bang, literally. A Saab Gripen had taken to the skies from another runway nearby and was blasting its way towards Pardubice. The previous day while sitting outside for lunch at our office, our conversations had been interrupted by an almost deafening rumbling sound emanating from the clouds above. It was like thunder that didn’t stop or die down, just a constant booming roar. Due to the low lying cloud we had no idea what it was. But now we had our answer.

As it appeared over the horizon and sped towards us the sound grew louder and louder until it passed over our heads and the full might of its exhaust was pointing at the crowd. My ears actually hurt it was that loud. The sheer power coming out of its engine was breathtaking, the heat, the sound, everything about it was just pure and utter earth shattering power. It felt as if the very air around us was being assaulted by this machine, truly epic.

It perhaps wasn’t the best idea to start the show with such an impressive machine as the following jet fighter that took to the skies although impressive, paled in comparison to its noisy counterpart. The pilot made up for his lack of presence with some impressive aerial manoeuvers however.

Any of you familiar with the Call of Duty games will be familiar with what took to the skies next, an Mil Mi-24 “Hind”. Possibly one of the most kick ass pieces of military hardware in the skies today. Sure it’s getting on a bit in years, over 40 years old at this stage, but, and it’s a big but, it’s still a formidable piece of kit that you would not want to have after you. You don’t associate helicopters with fancy aerobatic moves but the Hind pilot was a particularly skilled individual and he threw his helicopter around the skies like a toy.

While all this was going on, the World War II element of the show was kicking into gear. Soldiers finished up their meals, gathered their weapons and made their way to the display area. The mighty german armoured vehicles which I thought were just for show were suddenly filled with Nazi soldiers and firing up their engines. The men and women took up their positions and began a fascinating re-enactment of a ground battle with the Russian Army against those naughty invading Nazis. It looked as if the Red Army had triumphed and defeated their foe, but then on the horizon there appeared two of the armoured German vehicles complete with mounted machine guns. They quickly swept through their enemies’ ranks and captured their general. Although it was a re-enactment the attention to detail was so good that it felt quite genuine, and the sense of warfare was certainly conveyed. It made you respect the individuals who took part in such horrors for real. Although a good way to show off their military toys it was also a strong deterrent for war in general I thought. The sight of these people “killing” each other although quite the spectacle was equally disturbing. 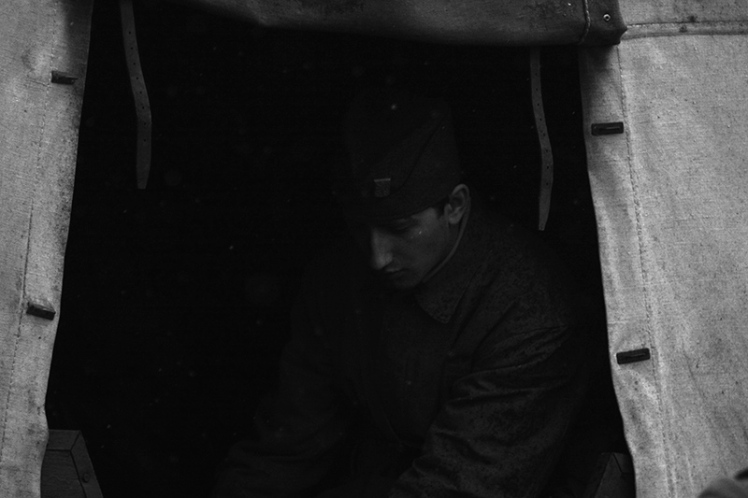 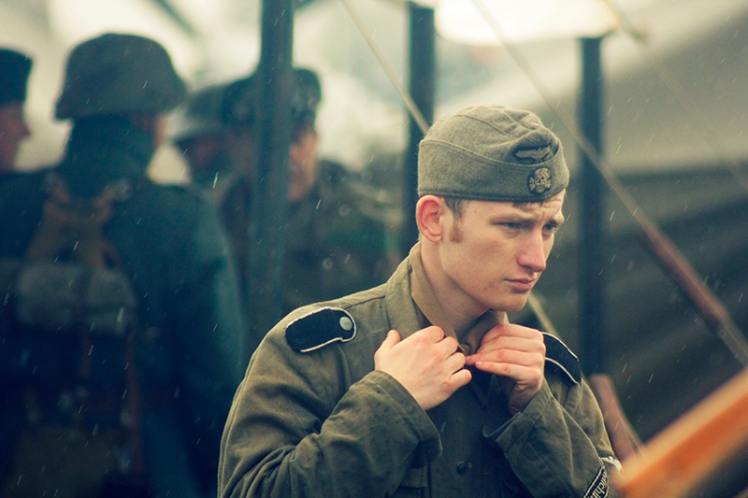 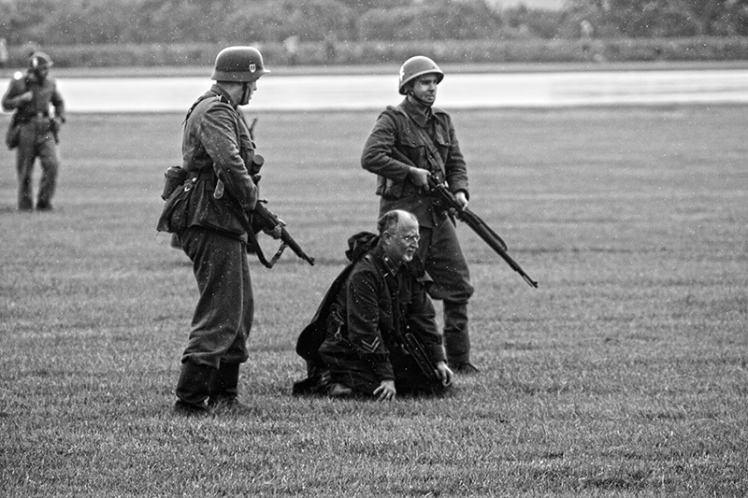 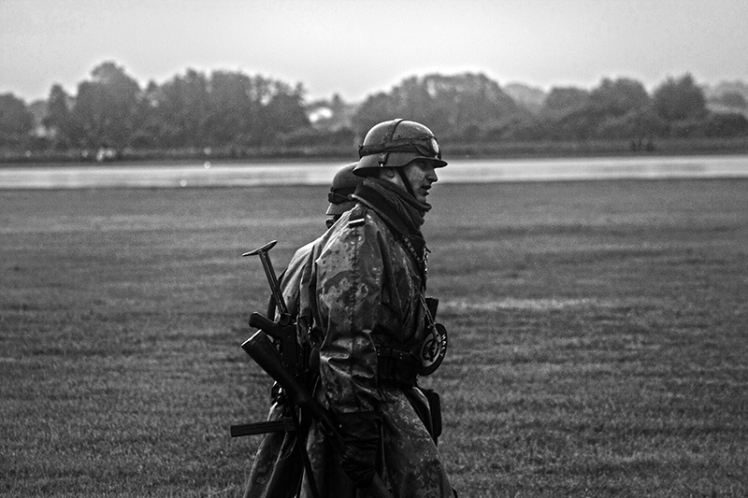 And then of course it was the Americans turn to play war, leading off with their beautiful creation, the P-51 Mustang. Its chrome paint job glistening as it flew overhead, and its engine purring and screaming as it performed various aerobatics, it really is a work of art.

Other highlights included a display from another military helicopter where airmen ziplined down to the ground before being lifted up in the air again and taken for a quick spin, dangling below the helicopter and waving to the crowds. There was a reenacted bombing run carried out by a number of smaller planes against an anti-aircraft gun position. Fake explosions and plumes of smoke added to the effect. 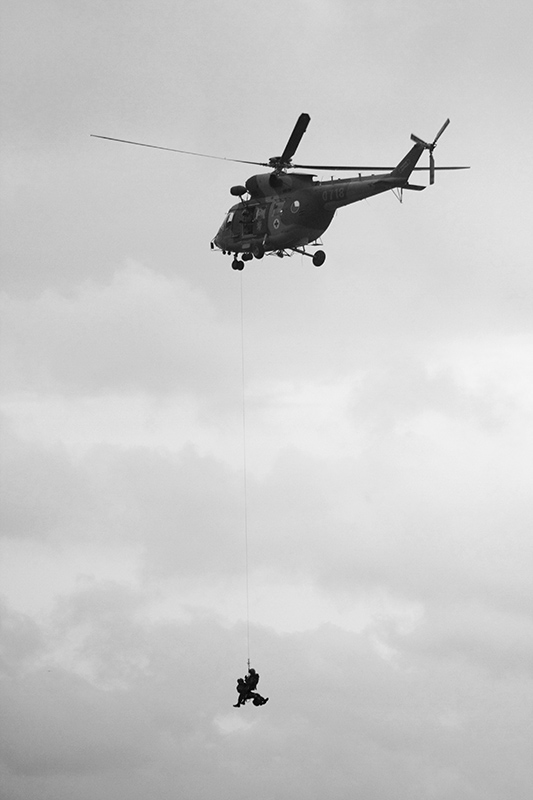 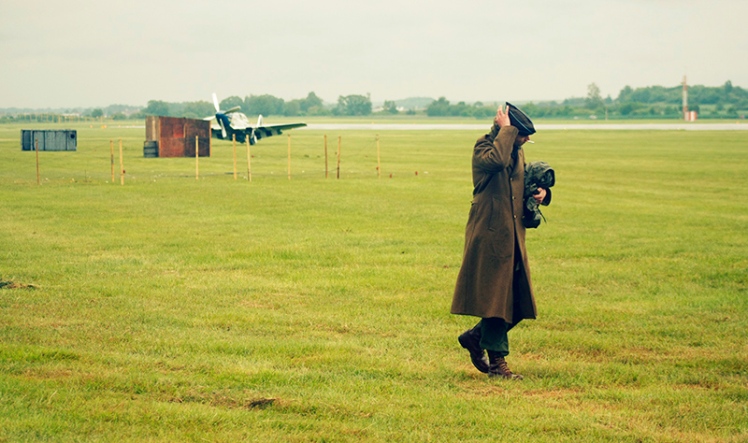 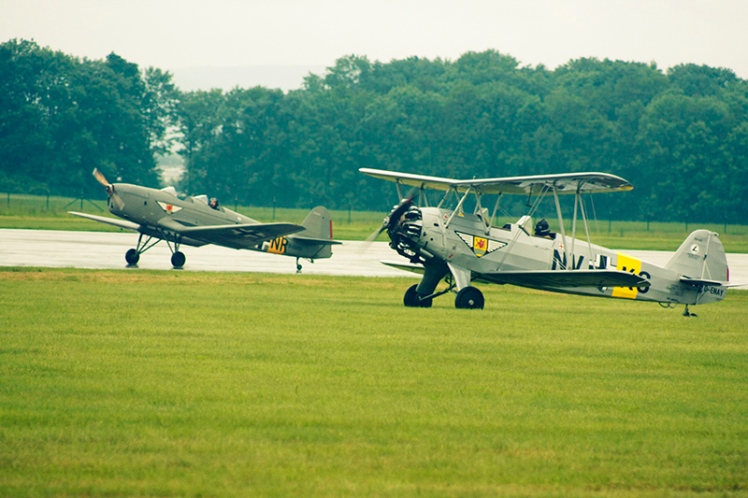 Despite the awful weather, and the missing B17 it was a wonderful day. The World War II element was fascinating to see and the modern machines were equally enthralling. Hopefully the weather will be much better next year and the B17 can make its appearance.