There’s been a bit of a scandal in Ireland and throughout Europe recently with the revelation that leading supermarkets were selling 100% Beef burgers that were in fact mostly consisting of a more equestrian ingredient. Cue Facebook newsfeeds clogged with horsemeat related jokes and YouTube videos parodying the whole debacle to within an inch of its life.

It’s been a few months and everything has seemingly calmed down, the jokes have worn thin and we’re all happy to munch on burgers safe in the knowledge they are indeed made of beef. Sure if we didn’t notice and they were still delicious what is there to complain about?

We had the pleasure of attending one of the first horse racing events of the season last weekend at Synthesia Park, the local track here in Pardubice, and home to the famous Velká pardubická, a gruelling marathon that tests the wits of both horse and jockey to the maximum.

You may have seen some images of the Velká recently in the World Press Photo awards. Local man Roman Vondrous won the prestigious award for his excellent photo story on the Velká this year. It was a pleasant surprise when the winners were announced that I was living in the same town as a World Press Photo winner.

I don’t know if it is a direct result of Roman winning the award but there was a huge amount of photographers present on the day. At each photo opportunity on the day there were easily 15-20 photographers all crowded around vying for that perfect shot. I was a little jealous of their shiny yellow bibs, big L lenses and paddock access but I was happy with my more casual position, being able to enjoy the occasion and not have to worry about an editor slamming me for not getting the shot.

I arrived a little late to the track having slept off a hangover from the night before (Sorry Sinéad). In the rush to get down to the track I took the bus to the train station, failing to realise I could have taken a bus directly to the track. In the sweltering heat I walked out from the bus station and made my way up over the bridge above the train line. On my right, the sprawling complex of the Paramo refinery stretched out for what seemed like miles. I made my way along the road, passing pipeline after pipeline, chimney after chimney, an industrial maze that piqued my curiosity. I’ve always been fascinated by industrial design, the unpolished nature of the buildings, no finishing or fancy surfaces, just what’s needed to get the job done and nothing more. Eventually the footpath ran out at a construction project, a new road being built over the one I had walked down. This wasn’t what I had seen on Google Maps.

I looked for a way through but there was no footpath, just bollards and fences, inches from the passing traffic. I hesitantly continued down the road I was on, realising I was walking parallel to the racetrack, but not getting any closer to an entrance. I walked along the side of the road, cars whizzing past kicking up dust and leaves. Eventually my nerves got the better of me and I ventured off the beaten track and into the woods to the left. There was a pathway worn through the undergrowth running adjacent to the road, so I followed that along until I entered a clearing. A group of friends sat on the grass drinking and laughing away. The sight of a man in jeans and a shirt with a SLR on his shoulder startled and confused them. They stared blankly as I trundled past.

I walked across the grassy area and rejoined the road. On the other side lay more forest, more trees, more randomness. I crossed the road and entered the forest knowing the track was on this side of the road. I walked down a muddy path alongside a small stream, perhaps a man-made water supply for the Paramo refinery. I continued along this path, roughly beaten into the long grass, through the woods until eventually the darkness of the overhanging trees gave way to the glaring sun. I was getting dehydrated at this stage, foolishly not buying a bottle of water for the journey.

The woods gave way to another clearing and a pathway across the stream. However there was now a new obstacle, or rather three of them. Railway lines blocked my access to the track beyond, the once distant echo of the track announcer now echoing through the trees around me. I had no choice but to cross the tracks, first one, then another and finally the last set of tracks and I was there! I felt like an 18th century explorer battling my way through the wilderness only to find a playground for the rich on the far side.

I think the ticket lady took pity on me as she waved me through without taking any money. My brow beaded with sweat, I shuffled my way down towards the grandstand and the concession stands. The smell of hot dogs, ice cream and candy floss filled my nostrils and my pace quickened. I made a beeline for the slushy stall. “Jedna Kola slushy prosim”………Sluuuuuuuurrrrrrrrrrp…..”Ahhhhhhh” Sweet relief. Like a dessert nomad discovering an oasis, I had been saved.

I made my way inside and began searching for the girls. Eventually I spotted them and made my way over. After making my apologies I learned that one of the horses had just died in the previous race. A somber introduction to my first horse racing event. It’s part and parcel of horse racing and always has been. Horses don’t naturally jump over huge hedges for good reason so the risk of injury and death is an ever present shadow over any event.

We made our way out to the viewing area behind the grandstand where the horses are paraded around before each race. The stable hands struggle to hold on as some of the horses nerves get the better of them, pushing and pulling their escorts in every direction. Those with their thoughts on placing a bet watch each horse like a hawk, trying to see a weakness that makes them a risky bet. The gambling element was very much an optional part of the day, not once did I feel pressured into placing a bet, in fact if we hadn’t walked past the betting stalls you’d swear it was just a day out for some lads and their horses. 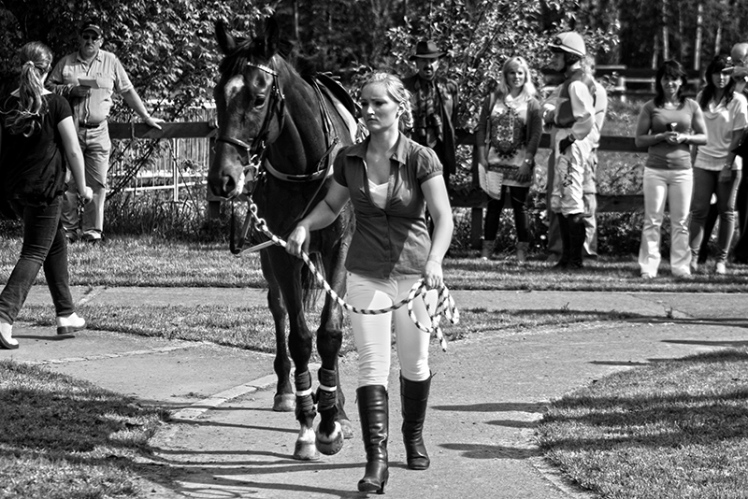 After walking around a few laps of the display paddock the jockeys appear, ready to mount their valiant steeds. The horses seem to calm down as their vertically challenged passengers get on board. It’s as if they know what’s coming once the jockey mounts up, they get into the zone and are in race mode. Which of course is ridiculous because they’re just really fast burgers at the end of the day. 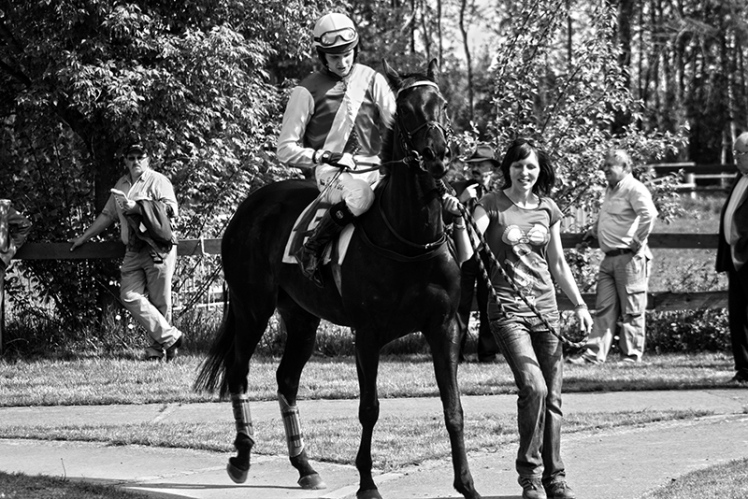 And then it was on to the track for the “mane” event if you’ll pardon the terrible but completely necessary pun. We took our seats in the grandstand, just on the edge of the sun’s shadow so our faces were cool but our legs were on fire. And they’re off! The horses galloped into life, kicking up dust as they sped down into the first turn. Everyone made it safely over the first hedge, and the second, and the third. The race sped into the woods and out of sight of the expectant crowd. Murmurs of concern grew amongst the fans as they waited for the pack to reappear into view. 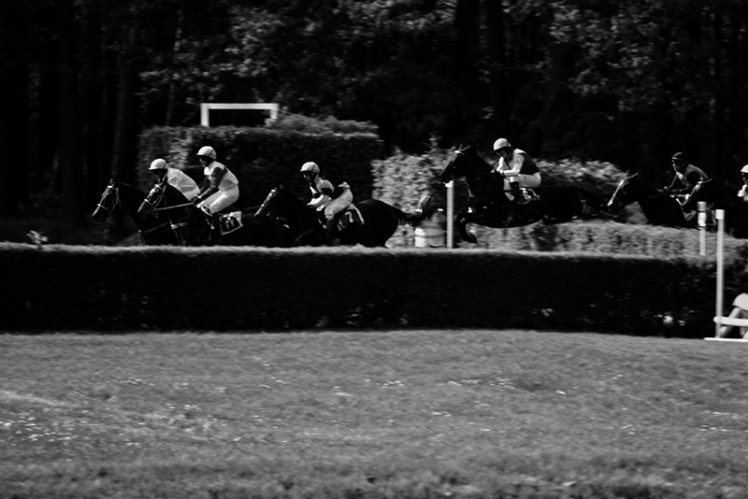 As they rounded the final turn and made the last desperate dash to the finish line a bell began to ring out at the finish line. The crowd rose to their feet, screams and shouts of encouragement grew and grew into a raucous din as the horses drew closer to the finish. The jockeys lashed their wips furiously, willing their horses to give that little bit more. Closer and closer they came, louder and louder the crowd shouted. The thunder of several dozen hooves causing the ground to shake, just a few more feet and there’d be a champion. The winner inched their nose in front at the line, the crowd erupting in delight in some corners, and imploding in despair elsewhere. The horses exhausted and dripping with sweat slowly wound down and turned back towards the grandstand. The triumphant jockey punched the air in delight, the fallen riders walked back to the paddock dejected, egos bruised, once shiny outfits covered in mud. 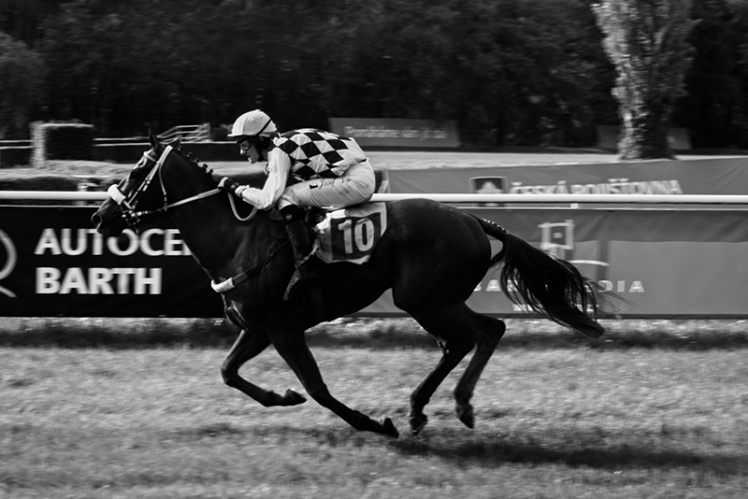 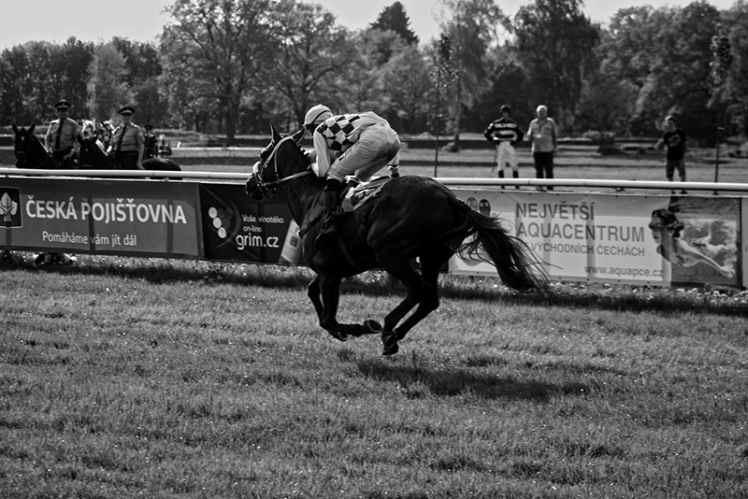 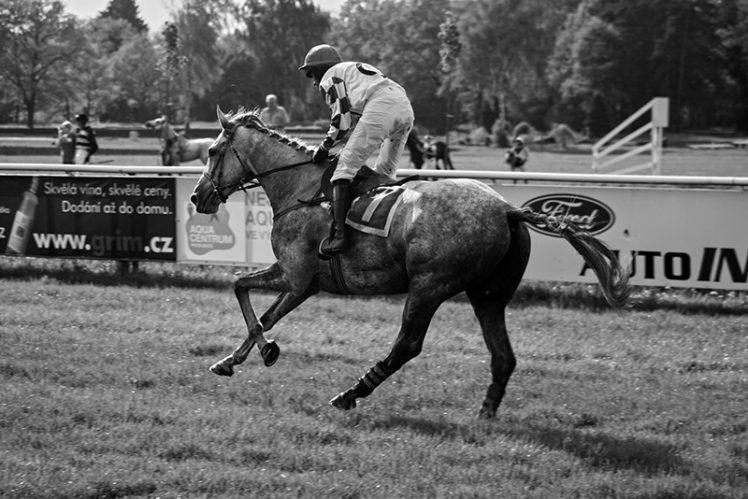 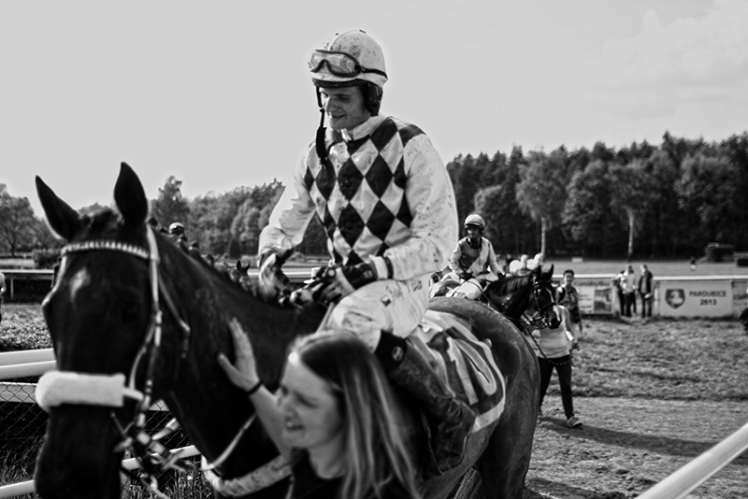 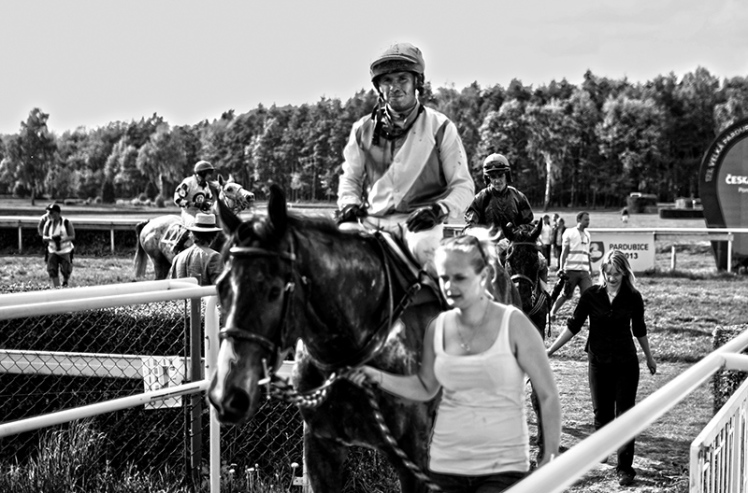 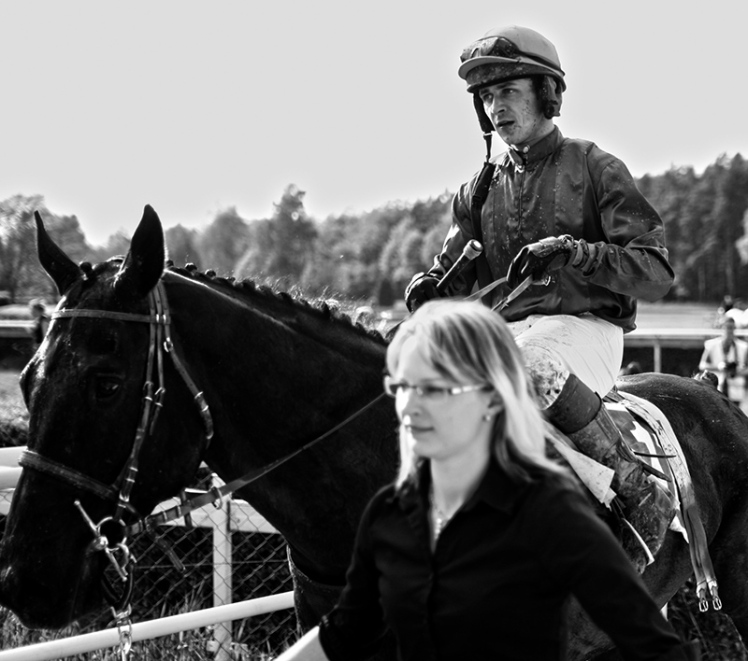 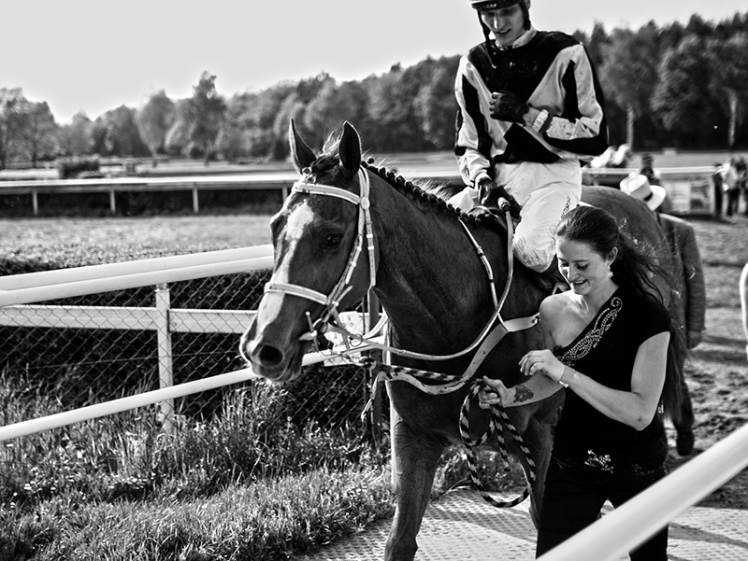 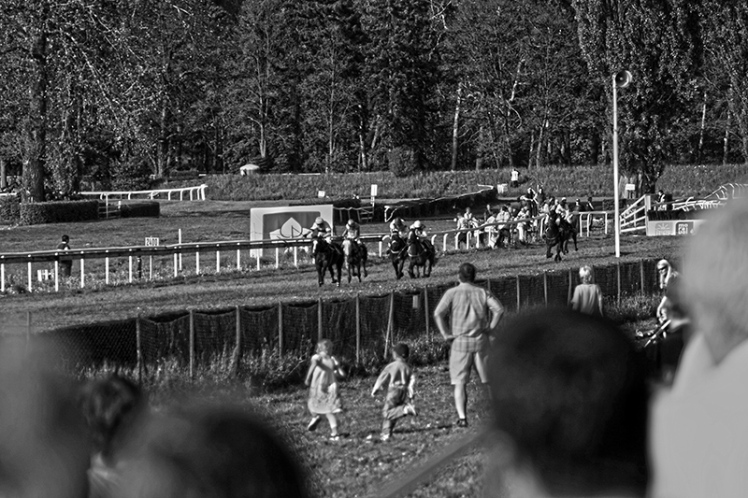 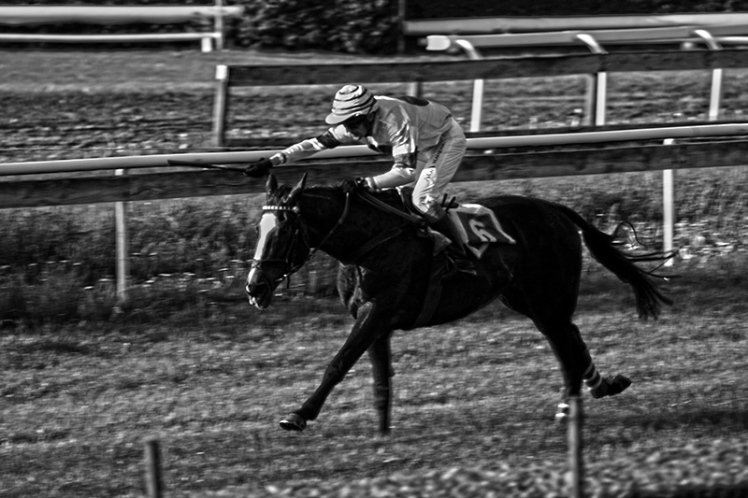 Of course a day at the races wouldn’t be complete without a spot of pomp and ceremony and Synthesia Park was no different. Although the majority of spectators were happy with jeans and a t-shirt, dragging their ice-cream covered kids from grandstand to bouncing castle and back, there were those that embraced the more eccentric side of horse racing. Ladies with the latest fashions and gaudy hats, men with flash suits and sunglasses indoors. There were two Ferraris parked outside and the VIPs had their own area  with waiters and waitresses complete with waist jackets and dickeybows. They still had to come down amongst us peasants to take their horse and carriage around the track between races. You could smell the resentment in the air, the eyes gazing down at you from noses most high. There are those that are there to see, and there are those that are there to be seen. I know which camp I’d rather be in…….although a Ferrari would be nice. 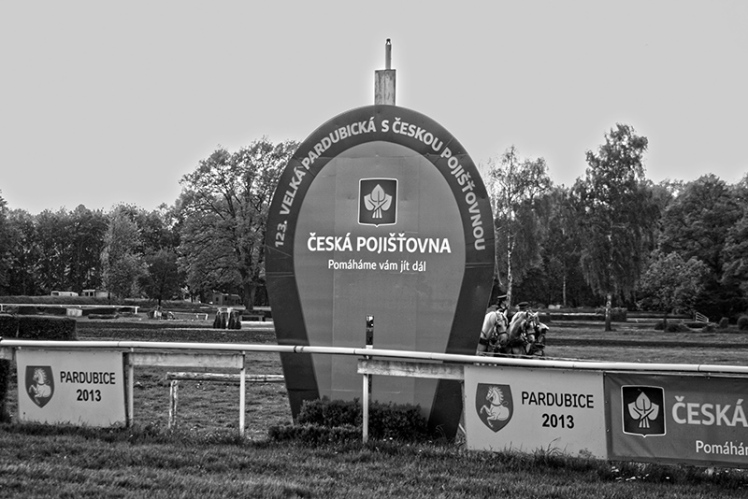 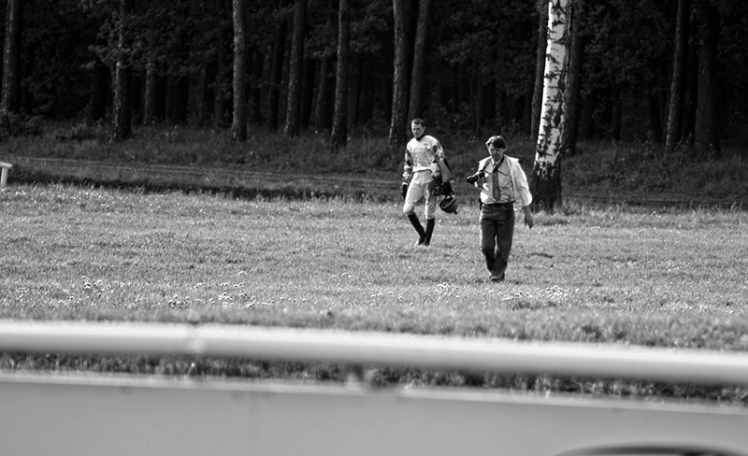 All in all it was a very pleasant occasion  the sun shone down all day, at times unbearable but nothing a slushy couldn’t fix. Everyone had a good time and thankfully no more horses were lost. Looking forward to attending the big one, and hopefully arriving in a more regular fashion. There’s something quite majestic about a racehorse in full gallop, every sinew stretched to capacity, veins bulging and the earth shaking below their feet. You just don’t get that feeling with burgers. Leave the horses as animals to observe, not to consume.

One thought on “For display purposes only”